Guide to Window Types and Names

There are 7 main types of windows for your home:

Our guide to window types below will talk about the benefits of each window style.

Picture windows, as the name suggests, provide a view of the outdoors, and can be found in very large sizes if desired. Picture window glass may or may not be inset with metal grids, which obstruct view slightly, but can reduce the risk of breakage (especially for large glass) to some degree.

Picture windows are usually fixed, meaning that they do not open. Obviously, a fixed picture window won’t provide ventilation, but permanent seals do have the side benefit of improved energy efficiency.

Casement windows swing open, usually by rotating a hand-crank at the bottom of the window. Casement windows can provide great ventilation, because the entire window opens unlike many sliding window designs. The crank is generally easy to operate with one hand at arm’s length, which means they can be installed in locations that are high or otherwise difficult to reach.

Casement windows are gasketed around all sides of the swinging window panel, so all other things equal, they are usually slightly more energy efficient than sliding windows.

Although quality casement windows can usually be expected to work trouble-free for their lifetime, the crank mechanism on some older casement windows may eventually wear and require repair. Another point to consider is that it may be difficult or impossible to reach the exterior of casement windows to clean them (from inside the house).

Typically, the angled side windows can be opened, allowing for a good amount of ventilation.

Single Hung Windows, typically vertical sliders, are often installed in smaller rooms such as bedrooms or bathrooms. “Single” hung refers to the fact that only the bottom sash opens, as opposed to double hung windows, where both windows can be opened.

Double Hung Windows are similar in appearance to single hung windows when closed. However, “double” hung means that both sashes can be opened. For obvious reasons, a double hung window is able to provide better ventilation than a similar sized single hung window.

While the example picture here shows a tilting (or “hinged”) style, double hung windows are also available in sliding varieties (although both sashes on a sliding model cannot be opened simultaneously).

In some situations, double hung windows may be safer (than single hung windows) for those with small children or pets, as the top window can be opened while the bottom remains latched.

Awning windows are often found in bedrooms. They can also be installed in high or narrow places (like above doors or other windows), because the crank mechanism is relatively easy to operate even while reaching.

Horizontal Sliding Windows are probably more common than any other style, because they are versatile and relatively cost-effective. Horizontal sliding windows are often wider than vertically-opening single or double hung windows.

Unlike some casement or awning windows, it’s usually easy to clean the outside of a horizontal sliding window from inside the house. On the other hand, they are generally considered slightly less energy efficient than hinged windows, and may occasionally accumulate dirt/grime in their sliding channel. 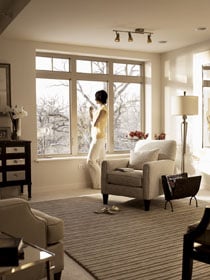 Whether you’re brainstorming designs for your next window project or just trying to identify a window in your home that needs replacement, here’s a quick guide to common window styles, with some basic information about each type of window.

There are 2 types of windows that open vertically. Double-Hung Windows have 2 sashes that slide up and down. You can either open the top or the bottom of the window. Single-Hung windows are similar but only the bottom part can move up. The top part is stationary. Vertically opening sliding windows are very popular in the Greater Seattle area for their convenience and versatility.

Still have questions? We’re happy to help, just send us a message online! At Lake Washington Windows & Doors, we strive to make window buying easy and informative – our ultimate goal is helping our customers choose windows that they will be happy with for many years to come.

How many types of windows are there?

There are 7 very common types of windows for your home.

What are the best windows for your home?

The answer to the best windows for your home depends on where you live, style you want, and your needs. In terms of brands, we suggest Andersen and Milgard.

What are the best windows for soundproofing your home?

The best windows for soundproofing your home are any laminated windows. The plastic between the glass reduces noise and vibration that is transmitted through glass.

What are the best windows for plants?

Any Low-E glazed glass is best for plants. It reduces heat during the day and maintains it at night, and blocks harmful ultraviolet rays.

What are the best windows for a sunroom?

What are the best windows for insulation?

Fiberglass windows are best for insulation.

Start saving energy, lower your heating bill, and improve the appearance of your home. Call the Certified Window and Door Replacement Specialists at Lake Washington Windows at (425) 255-2600 for a Free Estimate! We offer financing and payment plans too.